Wow! So much has happened since Hard-Fork number 22 in the old chain and last March 20th, that until now we had enough time to inform the community supporting our witness, about the current status of the nodes we manage under your trust. We hope that no event will happen in the future that will prevent us from informing again… Leer más »

Steemit Inc recently initiated a power down of its @steemit account which will result in a few hours that 2.6 Million STEEM would  to be placed on exchange account. This is publicly acknowledged by Ned Scott (CEO of Steemit Inc)  as a mechanism  to secure the company founds responding to a threat of an hypotetical hardfork that could potentially… Leer más » 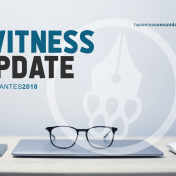 cervante Dear steemians, We have decided to post one of our witness updates in english again to show to the non-spanish speaking communities what we have doing during the last weeks. We have been several times advised to the fact that we need to explain things more often in English – sorry for our mistakes –  what we do in… Leer más »